The headline above was in Times Republican dated August 11, 1938 proclaiming Wayne county farmers planted more timothy than any other county in America.  In 1937 Wayne County produced 130,480 bushels of timothy seed according to government statistics. Iowa produced a total of 782,880 bushels that year, while the national production in 1937 was 1,565,760 bushels. This means that Iowa produced over one half of the national crop. According to 1937 figures, Wayne County produced almost nine percent of the national crop for the year.
The eight principal timothy seed producing counties in Iowa were Wayne, Ringgold, Decatur, Clark, Appanoose, Davis, Lucas, and Iowa counties.   Most of these counties are the rolling hills of southern Iowa where even today there are more hay fields and pastures than row crops.
The history of timothy in Wayne County was parallel to the history of the county.  It was thought that as early as 1844 timothy was grown in the area.  M.T. Kirk and Lewis Miles were both early pioneers; Kirk arrived in Wayne county in 1844 and Miles in 1852.  Each had a 1-acre patch of timothy, such a rare crop that visitors from nearby communities came to view the small fields.  William Kirk, son of M.T. made box-traps to catch prairie chickens that invaded the fields, some days catching nearly 100 birds.
An Englishman, Timothy Hurd, is responsible for the name applied to the grass called timothy that is harvested for hay. He is reported to have introduced the crop for farm use. Seed was eventually brought from England to the United States.
Probably the first timothy seed was harvested by hand. Later came mowing machines and then the harvester to cut the timothy hay which was later threshed with the old-fashioned horse operated threshers. By the late 1800’s and early 1900’s mid-summer found a “threshing crew” traveling from farm to farm with a steam engine and threshing machine to thresh or separate the seed from the straw.  Generally in each neighborhood one farmer might own a steam engine and threshing machine which he took from farm to farm. The “crew” was made of the local farmers helping one another to harvest the crop. 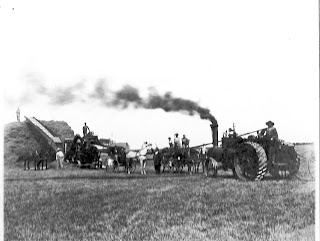 Prior to the threshing crew arriving the timothy, and earlier, oats had been cut down and wrapped in bundles ready for separating the seed from straw.  Below are some memories of threshing time written by Kathryn Hammond from the Seymour area.
“Threshing was a hot, dirty time but we made the best of it.  There were two men on the crew for the steamer and separator, and sometimes they stayed overnight with us. We usually had them two or three days for the oats and again later for the timothy. You furnished your own stacker for the straw.
It took six or seven bundle wagons, which were loaded and pulled to the separator, one on each side. The men liked to set the separator so that there was no dirty side, but this wasn’t always possible.  There would be three or four field pitchers to load the bundle wagons.  It took many men on a crew.
Each family furnished their own water boy. My brother, Ralph Shoultz, usually followed the crew as water boy in our neighborhood. He was a good one, kept the water fresh, once around the crew and back to the well to get fresh water.  He had a wooden barrel type jug and the glass jugs were wrapped in a sack and sewed on jug. By keeping the sack wet it helped keep the water cool. He carried two jugs on his pony.
It kept us busy cooking all the food. We needed a lot of food- farm men had good appetites! Aunt Orpha Stamps helped us cook the dinner. We usually made the pies, or at least the crusts, the afternoon before. There were usually two tables. Everyone ate so much food and drank so much ice tea, it’s a wonder we weren’t sick.
As there was no electricity for refrigeration, Dad had to go every day to Seymour for the ice. It was wrapped in newspaper, a comfort and a small rug. It was placed in a washtub and put in the cellar when we got home.
When my dad, George Shoultz, was threshing it was dark almost every night when he got home. Mom and I had the cores done, Of course, no matter how late it was, the horses had to be unharnessed and taken care of.”
James & Cameron Gibbs threshing crew are seen working near Cambria in 1897.  There are 16 men and 5 children in this photo. 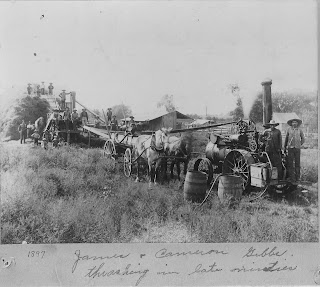 Although Wayne County is no longer considered the timothy capital it is still primarily a farming community where neighbor helps neighbor just as the early pioneers did.
Posted by PT Blogger at 12:09 PM No comments:

William Lemly Dent was inducted January 16, 1918 into Fifth Division, Co. G, 60th Infantry of American Expeditionary Forces.  After a few months of intensive training the new recruits arrived in France on May 1, 1918 ready to fight.  Lem Dent was listed as a sniper.  The 5th Division insignia was a red diamond with a white center and the motto “to the utmost extent of our power.” The German forces called them “Die rote Teufel”- which translates to “Red Devils.”

The greatest American battle of the war began September 26, 1918; it would last 47 days, extend along the entire western front, and end with an Armistice signed on November 11, 1918  bringing a close to “The Great War.”  There were 1.2 million American soldiers participating.  The Meuse-Argonne Offensive, as it was called, resulted in 28,000 German causalities. There were 26,277 American lives lost and 95,786 wounded.  William Lemly Dent was one of those causalities; wounded on October 14 and died from his wounds on October 17, 1918 at age 24.

Communications from France took time and were sketchy at best.  Americans celebrated the Armistice banging pots & pans and marching before William Lemly Dent’s family knew he had been killed.  His remains were not returned to his family until 1921.  A large funeral was held on Wayne county courthouse grounds near the newly dedicated Solders & Sailors Monument. Pvt. Dent was one of only very few killed Servicemen killed in WW I whose bodies were returned to Wayne County for burial.
Bearing the casket of Pvt. Dent were recently returned soldiers – Leonard Tuttle, Alvin Krouse, Arthur Gartin, Guy Tuttle, James Hart, & Charles Chester.

Alva F. Eaton of Humeston joined Company D of the Third Iowa on March 29, 1916. He served six months on the Mexican border. Later the Third Iowa was transferred to the 168th Infantry and arrived in France in early 1918.  It became part of the 42nd Division, commonly referred to as the “Rainbow Division.”

Sergeant Eaton was killed in action on March 5, 1918 at just 20 years of age. He was the first causality from Wayne County and only the second in Iowa at the time. Merle Hay, a soldier from Carrol County, killed on Nov. 3, 1917, was the first Iowan and possibly the first American serviceman killed in France during WW I.  Eaton is buried at Flanders Field in France. The American Legion Post and a street in Humeston both bear the name of young Eaton in honor of his supreme sacrifice for American freedoms. 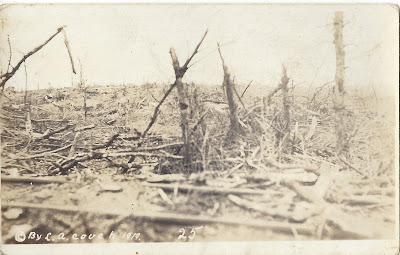 Above the  Argonne Forest in shreds after the battle and  below can be seen German dugouts
in the Argonne Forest. All photos are part of Prairie Trails Museum collections. 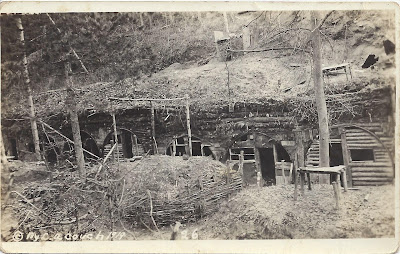