The 1969 Seymour High School Yearbook, The Tomahawk, was dedicated to Ernie Bryan also known as Slip King. The dedication referred to Bryan as Seymour’s number one booster. Ernie graduated from Seymour about 1936 and never forgot his hometown, even while living in Oregon over 50 years.

Slip King, as most Seymourites knew him, made his living as a representative of women’s fashion companies, selling merchandise to high end department stores and boutiques. But he was probably best known among magicians as one of the country’s best card handlers.  More on that later.

Born February 8, 1917 in Seymour to Thomas & Lillie Bryan, Earnest Carl Bryan had three brothers and a sister.  His father died a few months before Ernie’s fourth birthday in 1921.

A widow with several small children, Lillie probably had a difficult time. A woman alone in that era had few options for support or income.  In 1922 Lillie married Victor Lee King in a small ceremony, presided over by Mayor W.S. Merritt, at her home on West Main Street.

Lee King operated a pool hall in Seymour on the north side of the square.  He was also known to play cards for money.  Ernie Bryan learned a great deal about playing cards from his stepfather.  He also learned con game techniques from the carnival workers his parents would board during the off season.

At age nine, Ernie saw Howard Thurston, a renowned magician and master of card tricks, at the Iowa State Fair.  During his magic show, Thurston invited the young Ernie on stage to assist.  That probably gave Ernie his first taste of entertaining that became a lifelong passion.

Maurice Stamps, Seymour’s resident historian, recalled that Ernie was a freshman when he was a senior at Seymour High School.  They were both on the football team together.

In those days a country kid attending high school had to find his or her own way to town.  The father of classmates Leonard & Ray Noel had a building in the south part of town for his sons and others to stay at night so they didn’t have to drive back and forth from home each day.  As a country boy, Maurice Stamps sometimes stayed the night with the Noel boys.  Ernie Bryan would drop by to visit the upper class-men at night and practice his card tricks. 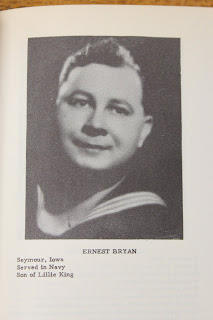 When World War II broke out Lillie King’s four sons all joined the service.  Oldest son Guy joined the army, his brothers William, Victor, and Ernest all joined the navy.  Ernie Bryan is pictured at right during World War II in his Navy uniform.  His fellow sailors nicknamed Ernie Mandrake the Magician after the well-known comic strip of that time.    Ernie never forgot his time in the Navy and performed magic shows for thousands of troops over the years.

After leaving the Navy, Ernie Bryan moved to Portland, Oregon.  He graduated from Utah State College in Logan, Utah, where he wrote a paper on “The History of Cards.

Ernie’s day job took him all over the western United States selling women’s clothing. As a top notch salesman Ernie’s ability to entertain was usually an asset.  If he couldn’t get an order, Ernie would do a magic show and quite often the customer would soften and buy merchandise.


Ernie Bryan was a nationally recognized authority on counterfeiting devices and sleight of hand. He worked with numerous law enforcement agencies and many of the major casinos in Nevada exposing cheating methods.  He taught classes to police departments and businesses on how to recognize con game techniques.   Ernie was on the security board of Harold’s Club in Las Vegas for several years.  He was past president of the Pacific Coast Association of Magicians and of the Portland Society of Magicians.  Ernie was also an active member of Society of American Magicians and International Brotherhood of Magician

Genii News, a magazine for magicians, featured Ernie Bryan several times and he graced the cover in June 1968.  At the time he was president of Pacific Coast Association of Magicians.

One thing Ernie Bryan never did was gamble for money.  He told friends it just wouldn’t be fair.

He returned to Seymour many times and became Slip King again as he entertained students at Seymour School assemblies, homes of friends and celebrations.  There are many fond memories of time spent in his hometown as you can see from the following comments by students and friends of Ernie (Slip King) Bryan.

Richard Joiner, in January 1992, wrote a touching tribute to his friend and mentor that was published in the Seymour Herald:
The past week I lost a friend who changed my whole life (in a sense) and maybe the lives of a lot of others. I met Ernie like a lot of others, at the school in the gym after one of his magic shows that he put on for the school. I helped him with his tricks along with someone else. I became interested in the rope tricks and asked to see how they were done. Well, he
said, he would show me if I would show him where to catch catfish. So we went fishing, I never did learn the tricks but know how they are done.
In 1954 I drove him on his spring run selling ladies clothes to Utah, Idaho, Oregon, Washington, and Nevada.  I was introduced to a lot of people as Ernie did his magic to entertain when we weren’t working.
He loved putting on a show. I met a man in Laketown, Utah, I liked and he offered me a job the next summer so I went back. Ernie had me drive him till the middle of May and then I went to work for Parnell Johnson in Laketown, Utah. I stayed in the west for 36 years and was privileged to become acquainted with a lot of Ernie’s friends, who became my friends. I never met anyone who didn’t like him. He overwhelmed them with his showmanship and personality. Ernie was the best salesman I ever knew.
One of the things he always told me was to respect people for what they are and always be presentable. He dressed impeccably. His magic shows opened a lot of doors for him and thrilled thousands from governors, senators, CEO’s, cowboys, ranchers, loggers, truck drivers and others.

Ernie Bryan filled a room when he walked in with his personality and his girth.  He had a great dislike for flying because of his size and cramped quarters in an airplane. For this reason he would hire young people, many Seymour grads, to drive him on his sales route through the northwest. Ken Davis, Seymour graduate and son of longtime Seymour Herald publisher Wayne Davis was one of those chauffeurs. 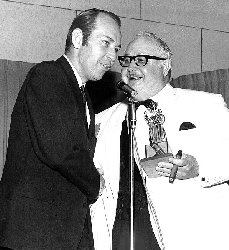 In the summer of 1968, Kenneth Davis had just finished his master’s degree and would be reporting for Army duty in August. Ernie Bryan asked if Ken would drive for him that summer over his sales territory, which was everything approximately north and west of Denver. Ken agreed, and recalls that as being one of the greatest summers of his life.

A highlight for Ken was flying to Edmonton, Alberta to help Ernie serve as security for the Canadian Mounted Police, who were running a casino for charity during Klondike Days (similar to Iowa State Fair).  Ernie is pictured at right during Klondike Days.

A favorite Ernie story recalled by Ken Davis: While in Edmonton, Alberta, he and I were walking along the midway and stopped to watch a young man do card tricks, then sell “magic” decks. The deck was what’s called a Svengali deck: 26 cards were normal, but the other 26 were identical to each other and trimmed about 1/16” shorter than the others. The deck is set up with every other card being a special one. So when you riffled the deck, all the cards looked different, but when you cut it, or stuck your finger in it while it’s ruffling, you always get the same card, say the 8 of clubs.
This kid on the midway did 8 or 10 different tricks with the deck, with spectators always selecting the 8 of clubs.
That evening, Ernie and I were having supper with two plainclothes Mounties at a Chinese restaurant. Across the room, we saw the kid from the midway, with some friends. So Ernie got up, walked over to the kid’s table, and with his best southern Iowa drawl, said, “I was just telling my friends about how great you are. If I bought you a drink would you come over and do some tricks for us?” “Sure,” the kid said. So he came to our table, sat down, and proceeded to do his routine, 8 or 10 tricks which all came up with the 8 of clubs.
Ernie watched admiringly, and then said, “Do you suppose I could learn to do card tricks like that?” “Sure,” he said, “I’d be glad to sell you this deck.”
Ernie said, “But I wonder if I could learn to do them with a regular deck.” He asked me for a new deck (I always carried his cards for him: he said they made him look bulgy.”) Ernie opened the seal on the deck, gave it to one of us to shuffle and cut, and proceeded to duplicate the kid’s routine, trick by trick, always coming up with the 8 of clubs. Then he turned the cards face up and fanned them, saying, “But mine are all different.”
The kid’s jaw dropped. Then he looked at Ernie, and the kid was just enough of a magician to know there was only one man that size in the world who could do what Ernie had just done. He said,” You’re Ernie Bryan,” Ernie said, “Yes, I am.”
The kid said, “Sir, it’s an honor being had by you.”  In more ways than one, it was like seeing a young pool hustler realize that he’d just been hustled by Minnesota Fats. 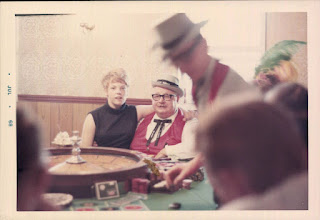 When Ernie (Slip King) Bryan performed at Seymour School he also brought along examples of the ladies fashions he sold. Women of the community and high school girls (now adults) recall modeling the beautiful clothing.

Ernie Bryan died December 27, 1991 from complications of diabetes at age 74.  Left to morn was his wife Jean, sons Douglas & Robert Bryan, granddaughter Alanna Bryan and a large group of friends who still remember him fondly.


Ernie (Slip King) Bryan was cremated and his ashes scatter over his favorite fishing spot, the Seymour Reservoir in Seymour, Iowa.