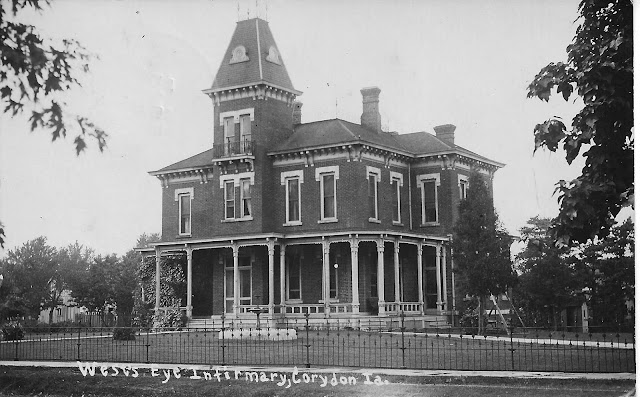 Where was the West  Eye Infirmary?

A recent post on the Facebook page, "Discover Corydon" has many people commenting and wondering about the location of this beautiful brick building.  Inquiring minds, interested in Corydon Iowa history, want to know.  Well, I did a bit of sleuthing at the museum, cause that's what I do when we have questions, and found some interesting facts.  What do you think the West Eye Infirmary, Ocobock Bank, Wayne County Courthouse, Wayne County Fair, Grismore Turkey Farm, and Wolf Funeral Home have in common?  Keep reading to find out!

The West Eye Infirmary was built sometime between 1890 - 1900 by Humphrey West and operated by Humphrey and his sons Walter and Lewis West until about 1908.  The stately building was constructed with brick from the Mardis kiln that was only a few blocks west.  The Infirmary was located on West street just north of Anthony street.  It was one block east and north of  John W.  & Belle Freeland's stately home that later became the Wolf Funeral Home (more about that home later).

Humphrey West was born in Knox County, Illinois in 1840.  He enlisted in Company L, 7th Illinois Cavalry in August, 1862.  On October 11, 1863 he was severely wounded in the left foot during the battle of Colliersville TN and taken prisoner. The wound was so serious he was taken to a hospital in Memphis where he remained until the end of the war. The wound gave him problems the rest of his life.

Humphrey and his wife, Climena came to Wayne County in 1871 by covered wagon and began farming in Clinton township.  In 1881 he was elected county treasurer, serving two terms until 1885.  After his term expired, the Wests purchased a farm on the east edge of Corydon where he raised short-horn cattle and horses.

That farm was known in the more recent past as the Grismore Turkey Farm, located at the end of East State Street.   By that time the West family included six children. One son, Jesse, died in 1879 at age two and is buried in Greer Cemetery in Clinton Township.

In about 1880, Humphrey West was instrumental in forming the Wayne County Agricultural Society and served as president for a number of years. Several years later, in 1914, his son, Fred West, a successful grain and seed dealer, helped to organize the Wayne County Fair. 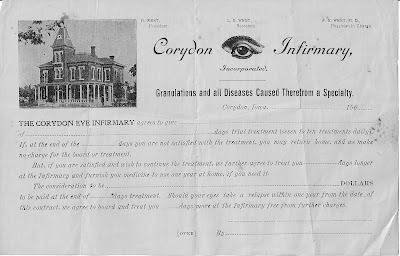 Walter West studied medicine at the State University of Iowa graduating in 1906. He joined his father, Humphrey and brother, Lewis in work at the West Eye Infirmary. The infirmary brought patients from all over the Midwest for treatment.  This form was used to subscribe treatment.


Dr. Walter West soon grew tired of working in the infirmary. He practiced in Trenton for a time before moving to Centerville, IA where he worked with the Hamford Clinic, a group formed with doctors with Wayne County connections.  Dr West died in 1961 of a sudden heart attack at the Elks Club in Centerville at age 80. A news article at the time of his death referred to him as a well known physician and eye specialist.  He & his wife Mae had no children.

Frederick M West was born in 1874 in Clinton Township, Wayne County. After graduating from Corydon High School around 1892, Fred continued to work with his father Humphrey on the farm.  When he was 22, in 1899, he purchased the former Ocobock Bank building on the north side of the Corydon square where in 1871, Jesse James and his gang robbed the bank. Fred opened a grain, feed, and coal business in the landmark building.

Fred West's business continued to grow and prosper as the town of Corydon grew. After several years of business he had both wholesale and retail lines. Around 1910 he also had a mail order business  handling hay, grain, field seeds, fuel and poultry supplies.

In 1911 he  tore down the old bank building and built a two-story brick structure in it's place that held his grain and seed business on the ground floor. Painted on the window near the front door was  - F.M. West Grain and Seed Merchant, Poultry Supplies, Feed and Fuel.  In the upper floor was Dr Warder, dentist and two osteopathic doctors, Dr Daniel & Dr. Brarn. This building (pictured below) housed Iowa Southern Utilities in later years and is now Corydon City Hall. 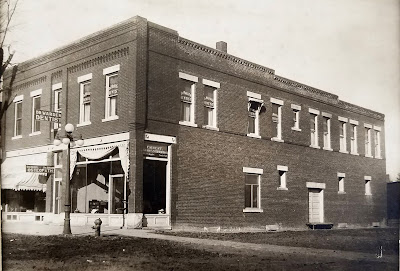 John Freeland came to Wayne County at age 17 in 1857. Both he and the county were young, the population at the time was less than 100.  He became a lawyer and served as county judge for one term, being elected in 1860. In 1873 - 1874,  following the robbery of Ocobock Bank, Freeland and E.E. Clark operated a bank in the same building.  Following that Freeland helped to organize Wayne County Bank which took over operations of Freeland and Clark. He was president of Wayne County Bank until his death in 1912.  John Freeland practiced law in Corydon for over 50 years in practice with Lewis Miles, H.K. Evans, H.H. Carter, among others. 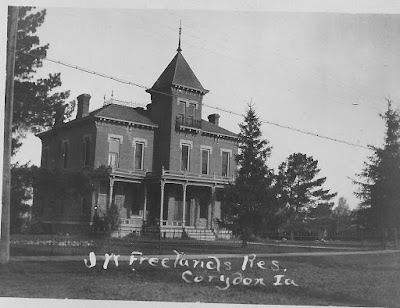 John Freeland and his wife,  Bell were pioneers of Wayne County and contributed much to the early growth of Corydon and Wayne County.  They were prominent, well-known citizens of their day.  The Freelands built the stately brick home on Greeley street most recently known as Wolf Funeral Home. Brick for this home was most likely built around 1880 and constructed of brick from the Mardis brick kiln. The home of Alex Mardis, John Freeland, and West Eye Infirmary were all of similar design, possibly by the same architect.  The homes were all in close proximity to one another in the northwest part of town.

The Freelands had three daughters, Carrie, Lillie, and Floy.  Youngest daughter, Floy married Fred West in 1902.  John Freeland was devastated when his wife Belle died in 1903.   In 1912 John Freeland passed away. Both are buried in Corydon cemetery.

After the death of their father, daughter Floy, and her husband Fred West, purchased the Freeland home on Greeley street and raised their family there. The Wests truly enjoyed entertaining in the lovely home and took pride in upkeep.  The years went by, Fred and Floy grew older, and their health began to fail.  In September 1939 they sold the home to Roy Wolf  to become Wolf Funeral Home. Fred & Floy West moved to a home on East State street where they lived out their days.  Floy died in 1949 and Fred in 1954.

As you can see the West family contributed much to the history of Corydon and there were many connections to other prominent pioneer families of the times.  I hope all the information isn't too confusing.  Once I began to find connections between the families and events it just kept going.