Promise City - One of a Kind

The title above is the Promise City logo.  In the 1990’s long before internet searches were commonplace Promise City resident, Alice McMurry, researched the town name and came to the conclusion that there is only one Promise City in the world.  Now with the ease of googling she has been proven correct.  Google the town name and there is only one answer, Promise City, Iowa population 113.  We aren’t sure if that includes dogs.
The first settlers arrived at this flat spot on the plains in 1852. There were a number of  homesteads located close to one another and the settlers said this area had great promise to become a city. A post office was established in August 1856 and the name Promise City became official.  However, the town was not platted until 1881 and had a population of 300 at the time.

Wayne County was first joined with Appanoose and Des Moines counties. In 1848 Wayne, combine with Appanoose, was separated from the Des Moines county, but it was not until 1851 that organization began, and it was divided in precincts later known as townships. The northeast quarter, precinct Number One, was known as South Fork precinct.  Probably so named because the south fork of Chariton River runs through it.

One of the first settlers to arrive was John Henanman. In 1854 Elisha Kinser age 47,along with sons David, 22,and Michael, 21, came from Indiana by ox cart to southern Iowa.  Michael, his wife Elizabeth, and brother, Samuel Kinser came to this area in South Fork precinct in 1855.   Also that year, John Estep and family settled here.

In the fall of 1856, John Estep, John Henanman, and M.J. Kinser began to lay the first site of the town, which they called "Promise of a City," and could only hope that it would someday fulfill the name.   Elizabeth Kinser, wife of Michael, would stand on the roof of their log cabin and call the men to dinner while they were working to lay  the site of the town.

A furrow was plowed from Centerville to Corydon in the spring of 1856 by John Ferren at a cost of $5. This was the early beginning of a road between Wayne and Appanoose Counties’ and much of this path followed closely the present-day route of Highway 2.  Soon after a road was established the stage coach began traveling between Centerville and Lynn (Leon?) in 1859.

The Railroad Comes to Town

When the railroad came through in 1871 it gave a boost to Promise City and more businesses came to town.  There was a bustling and active main street where one could purchase almost anything.  There were general stores, banks, drug store, furniture store, millinery shop, hardware store, restaurants, lumber business, Dr. Offices, blacksmith, churches, and  hotels.  For a time there was even a newspaper, Promise City Press, a special edition of the Lone Tree Press of Seymour with four columns weekly of Promise City news.

One hotel, built by Willis Carr, was the Western Hotel, operated by R.N. Barker. It later became the Barker House operated by Calvin Barker and Harve Barker. The charming photo at left shows a group of children, including Amy Robertson at far left, on the front porch of the Barker House.  This hotel was across the street from Amy’s home where she grew up. (The hotel was located where the home of Cary & Brenda DeVore is now just east of Lockridge Lumberyard on Highway 2.)

Samuel Sharp operated a general store on the east side 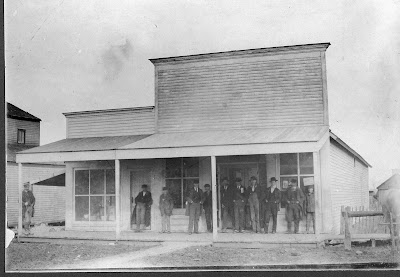 of the main street which he later sold to his son-in-law to be, Greenleaf Robertson and his brother Grant.  Greenleaf soon married Sharp’s daughter Iona and they became parents of Amy Robertson. The Robertson Brothers operated the general store that bore their name from 1892 until 1942.

The front original front entrance of the general store can be seen in Prairie Trails Museum in the Main Street Gallery. It is the front of a general store exhibit.  The glass has a small hole from a gunshot reportedly by Grant Green.  The store had apparently been broken into or someone had tried so Grant was sleeping on the store.  Upon hearing  a sound in the night he raised up and took a shot through the door. No one was injured and there is no word on whether there was a burglar.  It makes a good story for a museum tour!
The store was located where the Promise City Community Center is now, on the east side of Center Street.

On the east edge of Promise City was one of only four octagonal barns, sometimes called "Round" barns in Wayne County.  It was located on what was known as the Anderson farm.  It had long been a landmark but was destroyed by fire in 1957.

The Farmers State Bank built in 1903 by the Robertson's was the first bank in Promise City.  Nate Robertson was the cashier for many years. After the bank closed the building was purchased by Amy Robertson.  in the 1940's Amy and partner, Tilda Schmidt had a toy factory in the building, selling wooden toys all over the country.

The building is the only brick structure left in Promise City.  It has had a number of uses, including as a cafe for several years.  The building is currently home to apartments.