Billy Davis and the B# Band
This story was first published in the March 2011 newsletter of Wayne County Historical Society.  Mr. Davis just recently passed away on October 25, 2018 at age 92. To those of us who knew him as band director he will always be Mr. Davis.  A memorial servicewill be held at the Corydon Baptist Church on Sunday Dec 2 @ 2:00p.m. 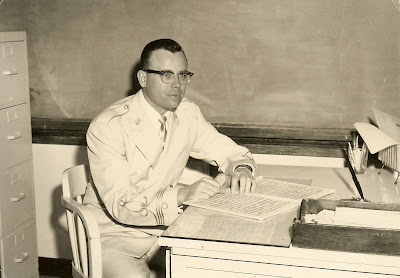 Billy D. Davis retired in 1988 after teaching instrumental music for thirty-eight years; three in , schools, and thirty-five in Corydon at .  Teaching in Corydon/Wayne school system 1953-1988, Mr. Davis taught more than one generation in some families attending .

Mr. Davis’s program included performing as a marching band, concert band, jazz band, stage band, pep band, solos, and groups in festivals and annual contests.  There were several years he also served the school system as the vocal music teacher in addition to his duties as Director of Instrumental Music. Mr. Davis directed the popular summer band concerts on Corydon square for 32 years. 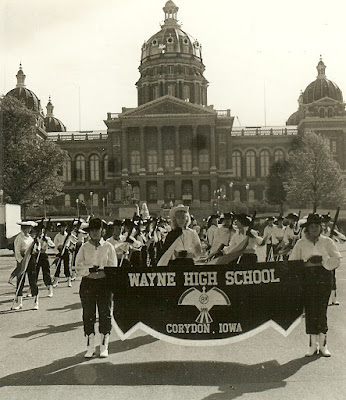 During his 35 year tenure at Wayne Community School there were over 300 ensembles and soloists who earned Division I and first place awards.   Over the years the B Sharp Marching Band brought home numerous awards.  In April 1987 the B Sharp Marching Band won first place in class 2A at the Drake Relays Parade (the band is pictured in front of the state capital in the photo below right).
Under Mr. Davis’s direction the concert band recorded five LP albums and one cassette. Titles of the albums are as follows: The B# Sound of 1963, Billy’s Band 1970, Edifice (ca.1974), Reflections (1978), Odyssey (1982).  All five albums are currently a part of collections, donated by Bill & Jane Davis a few years ago. 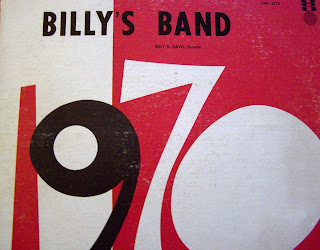 Every four years the band took an out-of-state extended trip to , , or which included competition either as a marching band or a symphonic concert band. During the years many awards were earned by the marching band and in other areas of instrumental music where the judges acknowledged the high level of performance by his students as groups and individuals.
In Bill Davis’s final year of teaching instrumental music at Wayne Community High School the band won eleven first place awards, plus sweepstakes trophies and plaques at contest within the state and also won the Silver Medal at the International Music Festival in Estes Park, CO.
A 1985 article in the Peptimist (student page in Times Republican) noted that Bill Davis had the longest tenure of any teacher at Wayne Community at 32 years. He taught three more years, retiring after 35 years of teaching kids to keep time, step in unison, perform intricate formations on the football field during half-time, and appreciation of  playing a musical instrument to the best of one’s ability. 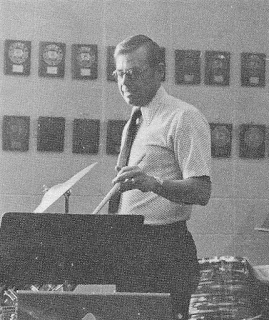 Editor's note - I recall with fondness my time in marching and concert band under the direction of Mr. Davis.  I was part of the front row twirlers during marching band.  One particular half-time performance for a home football game the band played Alexander's Ragtime Band.  We modified it to fit our band by shouting out "Billy D's Ragtime Band!"  I'm not sure Mr. Davis appreciated our cleverness as much as we did!